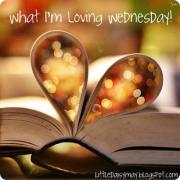 It’s Wednesday and this is what I’m loving…

Sesame Street Live: we went Sunday and It was great!  These are the memories I will keep forever.

Chelsea Houska’s hair: I am always loving this girl’s hair

Starbucks introducing Vanilla Macchiato: I haven’t had it yet, but I can’t wait!!  (I still have some $ on my Christmas gift cards!)

It’s Wednesday and I am saying SO WHAT if…